Woolley sits underneath a flight path, but other than that it’s description matches perfectly of that written by Arthur Mee in 1936. Even the water taps are in place outside the houses.

The strange dome-roofed church has its own walled garden, the gate whistled as we opened it. We shook the blossom from the tree. We saw a villager walk a tiny horse up the hill.

I plucked the nylon strings of ‘Pyewacket’ on the bench and used her back as a drum. The sky threatened but never delivered. I feel we should let Arthur Mee’s words guide us every now and then on these journeys. His lines are musical and easy to drape over music. Woolley, in fact, was the first Thankful Village Mee found.

The tune still lacked a chorus and a few months later a friend bought me a book of Somerset folk songs. ‘Rosebud in June’ was collected by Cecil Sharp from a farmer, William King, of West Hastree, Somerset. Versions of the song can be dated back to the early 18th Century.

One of the ideas of Thankful Villages is to allow randomness to help me create. Arthur Mee and the luck of World War 1 chose where I would go and fate handed me this song. I laid the words and tune of ‘Rosebud’ over the chords of my half finished chorus and in between Arthur’s words.

Everything seemed to be where it was supposed to be.

Aisholt is hidden in the folds of the Quantock hills in North Somerset. A tiny knot of buildings clustered behind incredibly narrow lanes. Tim Whittingham reads at humanist and non-religious funerals; he is also the Chair of the Friends of Aisholt. He raises money for the maintenance of the church even though he doesn’t go to church himself. The church, as in many of these places, is the heart of the village. It has a purpose outside that of religion. It binds the community together.

We met him the day before Remembrance Sunday and he read a poem for us by Dollie Radford about the Quantock hills.

Dollie Radford was a contemporary of William Morris and Tim knew that my previous project had been based on his words. I love it when these connections throw themselves up, when the songs seem to write themselves.

Peter is a church warden of Church of All Saints who invited us to his house for soup and tea. We sat and spoke with his wife and then he took us up the clock tower. Peter showed us the clock mechanism and I recorded it slowly clicking and whirring. We stood on top of the church tower and saw the hills surround and look down on us.

Peter asked if we would return the next day to record the village singing on Remembrance Day. The next day the sun shone and the church was full. I recorded the bells ringing and choir singing. I wove them in time with the clock mechanism and Tim’s soft patience voice. 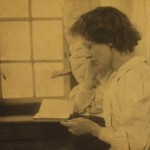 I wrapped them around themselves just like the green rolling fields envelope the village. Aisholt is all warmth.

Imogen Griffiths took the photos and did the filming.

Rodney Stoke is dominated by St. Leonard’s church. It stands tall and proud on a small rising by a sharp bend.

The village is partially named after the Rodney family and many of them are buried in the church. A small room to the side of the alter houses tombs and statues of the Rodneys. Some of them are beautiful and macabre. Others are unintentionally comical.

Arthur Mee describes them in detail in his Somerset guide book: part of his series, The King’s England, from which the name Thankful Villages derives. I follow the directions from nearly a hundred years ago and hunt for hidden carvings behind pews and altars.

A man arrives to read the electricity meter. We search for the meter together but it cannot be found. Just strange, stone ghosts.

The words spoken on this piece are from Arthur Mee’s entry for Rodney Stoke in The King’s England.